Are you comfortable with being naked?  Are you comfortable around others who are nude? If not, have you given any thought as to why that is?  Can you remember what people said – or didn’t say – to you about nudity while growing up?

I grew up very uptight about my body. Nudity wasn’t okay. I never exposed my breasts or genitals to the open-air. That is unless I was getting into the shower behind a locked door, ensuring my privacy. Changing at a pool while wrapped in a towel was my go-to move.

I finally began to let all of that body shame go when I went back to school in 2009 to study sexuality – a grown-ass woman by then! I’ve written about it a bit.

Now, over ten years since I began those studies, nudity is normal to me. I don’t even do a double-take any more if someone is naked. So going to Burning Man, where people walk around naked or topless (or bottomless) is less than a blip on my radar.

There was a significant change I noticed this year: There were WAY more naked men – naked DONG, as one friend put it – than I’ve ever seen out there.

In the past, exposed penis was limited to two instances: 1) “shirt cocking” – described as wearing a shirt and zero pants, or 2) group nudity as part of a naked bike ride or naked party of naked people wandering around the camps naked (but those are open to ALL bodies, not just penis owners). Naked, amongst 70,000 strangers! 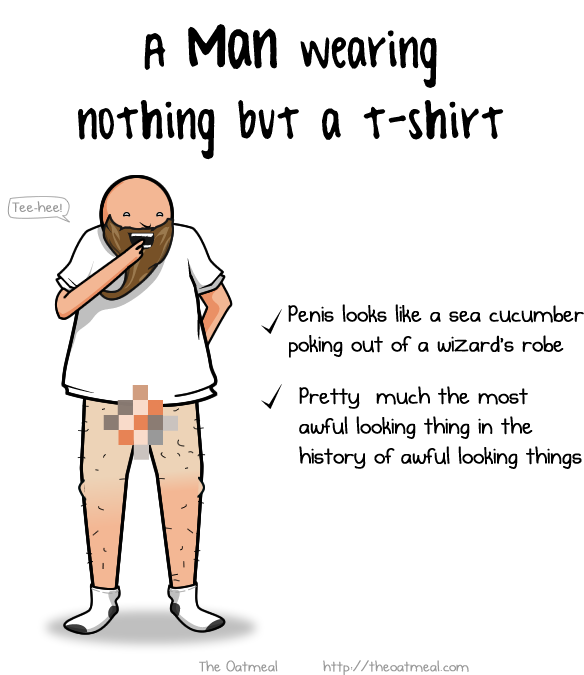 funny, except I’m not a fan of the description of the penis. *shrugs*

Nudity is a strange thing out there.

And while most people who attend Burning Man are not bothered by it, law enforcement in past years has cracked down on folks for “indecent exposure,” especially if children are near. But that’s where I think law enforcement is overreaching – nudity is not sex. And it’s okay for children to see a naked body. They have one of their own. Duh. Lots of little kids love to run around naked. Getting them to keep their clothes on is the challenge for lots of parents at some stage of a kid’s life. (So I guess this adds more fuel to the idea that Burning Man is where we get to be kids again).

Burning Man 2019 was very different from other years as it was pretty warm at night, I’d say mid-50’s F/12 C. So it also meant there were men naked at night as well. (Interestingly, I don’t recall seeing any nude women at night. “Scantily-clad” women, yes. But that’s normal for Burning Man).

There are some places there that it’s almost tradition that femme or female-identified folks dance in varying amounts of clothing on top of the art cars – you’ve probably seen them in youtube videos. I expect to see that now.

But men have started dancing up there too in the past couple of years. This year, following the trend, a naked man was dancing on top of one of the music sound cars at sunrise too. I was so pleased to see we had gotten to that specific place of parity, even if the cis-het guys in my vicinity in the crowd weren’t so excited.

One morning, there were two men, randomly dancing while naked in the crowd of sunrise revelers at the base of one of the popular sound cars. I overheard a man in my camp say, “That’s inappropriate. I don’t want to see that.”

Then he turned and asked what I thought. I said it didn’t bother me, because it wasn’t FOR me. I was happy to see these men expressing themselves, extolling the freedom they must feel in being nude.

After he polled the friends around us about this topic, I shifted gears and brought up the age issue since these naked men were very different ages. One friend said it was okay to see the old guy naked but the young guy – “yuk.” I thought this was an unusual reaction, so I asked:

– Would it be okay if it were a woman naked?

– Of course! A woman is much better to look at.

– Alright, but what about an older woman naked?

This is where I kind of lost it.

This belief is precisely what makes young women fear aging. A young woman’s body is okay to see naked but an older woman is not? That’s some bullshit. If *I* were to wander around the playa naked, inevitably there would be someone who thought like he did and say, “I don’t want to see that.” That’s because my body no longer looks like a 17-year-old girl’s.

(Let’s pause for a moment to acknowledge that the standard of beauty for women is just that – one of a CHILD who isn’t even yet a legal adult. YUK. When will we reject or change this?)

So there it was – the definition of the “Male Gaze.” He doesn’t want to see certain types of nudity presumably because he was taught that nudity is for his pleasure!

He’s not alone, though.

Honestly, in the past when I’ve had a conversation with anyone about nudity, nakedness, nudist colonies, or the nude body, someone always says, “yeah, but it’s never the ones you want to see.” Again, as if someone else’s nudity is for us.

This might also be why Europeans have been better at separating these two things. They accept nudity as normal and it’s part of everyday life. So it’s easier to see the body naturally as a form and not a sexual object.

I’m glad Burning Man holds Radical Self-Expression as one of its Principles. I celebrate anybody who wants to be naked at Burning Man. There is a certain level of freedom to it.

Even if I’ve yet to be brave enough to do it.

About the Author Lanae

Dr. Lanae St.John is a Diplomate of the American Board of Sexology and certified sex coach with a background in sexology and a passion for helping people improve their sexual health and relationships. She is the author of "Read Me: A Parental Primer for "The Talk"" and the upcoming "You Are the One: How stopping the search and looking inside will lead you to your romantic destiny," and is committed to staying up-to-date on the latest research and trends in the field. Dr. St.John aims to share her knowledge and expertise in a relatable and approachable way through her blog on themamasutra.com.

Introduction to The MamaSutra

More
Introduction to The MamaSutra

More
…with a Bullet

Ready to take your sex and relationships to the next level? Book a call with me now and learn how my coaching can help you create a life full of joy and passion. Don't wait - take the first step towards a better life today!